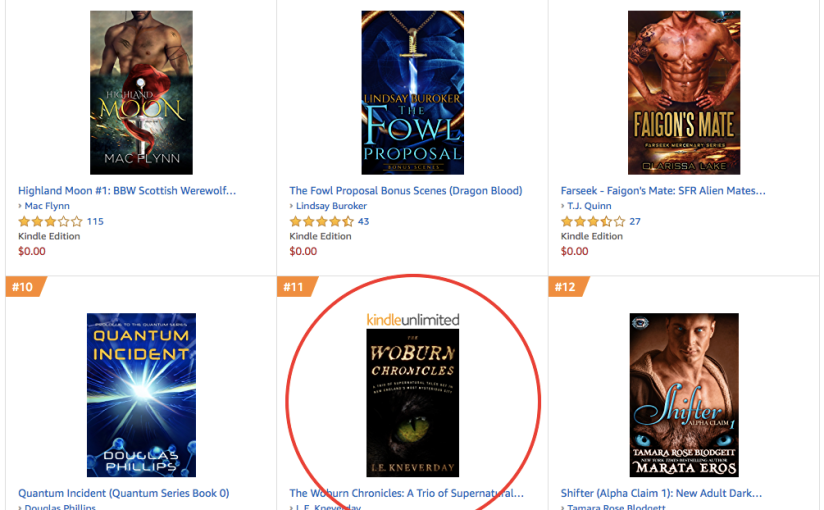 My fellow writers, let me be clear and unequivocal in this declaration:

Promoting books is the worst part of a writer’s job.

Who in their right mind enjoys pestering friends and family — and, of course, strangers — with promises of dazzling plots and paragraphs? Who enjoys reminding readers to leave you reviews on Amazon and Goodreads?

At the same time, you know there are at least a few people, somewhere, who share an affinity for your particular brand of weird; people who would appreciate and enjoy your work and take pleasure in leaving you a review. How do you reach those people?

On October 1st, I launched a week-long promotion for my short story collection, The Woburn Chronicles, to see if I could crack the code.

What follows are the true accounts of my follies, foibles, failures, and ever-so-occasional bouts of good fortune, which I encountered while carrying out a multi-pronged promotional offensive.

Continue reading at your own peril. 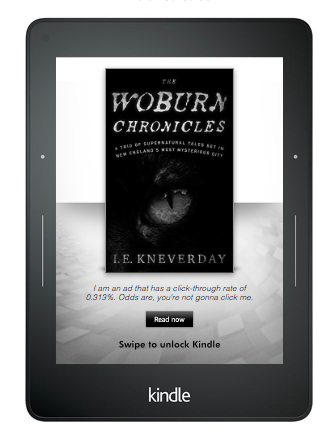 I had always imagined that running ads on Amazon would be like pulling a magic lever, and that downloads would skyrocket.

I’ve been running an “interested-based” promotion, where I’m targeting the following interests (based on the format and genre of the The Woburn Chronicles):

After 13 days, the ad for my book has been displayed 3,196 times, which sounds impressive … until you hear the second half of the story: Of those 3,196 impressions, only 10 have resulted in clicks. 10! That’s a 0.313% click-through rate, which is positively atrocious. 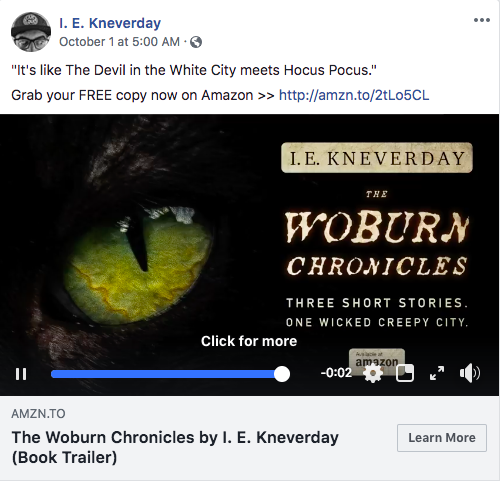 In my case, I displayed my ad only to people who A) listed ebooks, Kindle, reading, etc. as hobbies/interests AND who B) listed sci-fi, fantasy, horror, etc. as their preferred genres.

The results? My ad was displayed 1,524 times and 204 people watched at least 10 seconds of my book trailer. More importantly, those 1,524 ad views resulted in 17 clicks, which means this ad had a click-through rate of 1.12% (not great, but way better than what Amazon has been yielding me).

I try to do this sparingly. I posted once back in March, around St. Patrick’s Day, right when The Woburn Chronicles originally came out.  FYI: The 3 stories that comprise The Chronicles are interconnected and follow an Irish immigrant family (over the course of a century) as they encounter strange phenomena in the blue-collar suburb of Boston that they call home. Hence, the St. Patrick’s Day promotion made sense.

Likewise, given there is a strong horror element running through all of the stories, I thought running a promotion at the beginning of October, just as people were getting pumped up for Halloween, made sense. (In retrospect, a million other horror writers probably thought, and did, the same thing.) 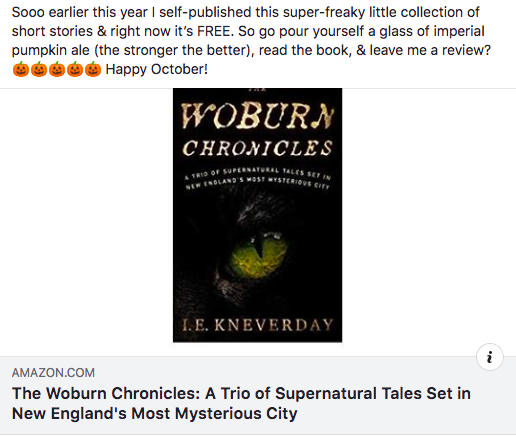 At this point, I should probably mention that as I was doing all of this promotion, I was also running a free book giveaway on Amazon. That is to say, yes, I was paying for ads and reaching out to friends and family in order to drive people to my Amazon listing so they could download a free copy of my book.

Why the hell would I do that? Probably because I majored in Humanistic Studies in college. (Business has never been my strong suit.)

Also: I didn’t want to make money from this promotional campaign, I just wanted more exposure, and I wanted reviews. (I had screwed up back in March by not putting any energy into getting reviews. So I viewed this October promo as a “relaunch” of sorts.)

From a vanity perspective, of course, I also just wanted to see my book climb its way up Amazon’s best-seller rankings.

This was definitely the funnest part of doing all this promotional stuff: Being able to share my book’s progress as it climbed Amazon’s rankings and use it as social proof.

At first I only did this on my personal accounts, but once I managed to crack the top 10 in the Sci-fi & Fantasy short reads section, I felt worthy enough to share the news on Book Twitter. 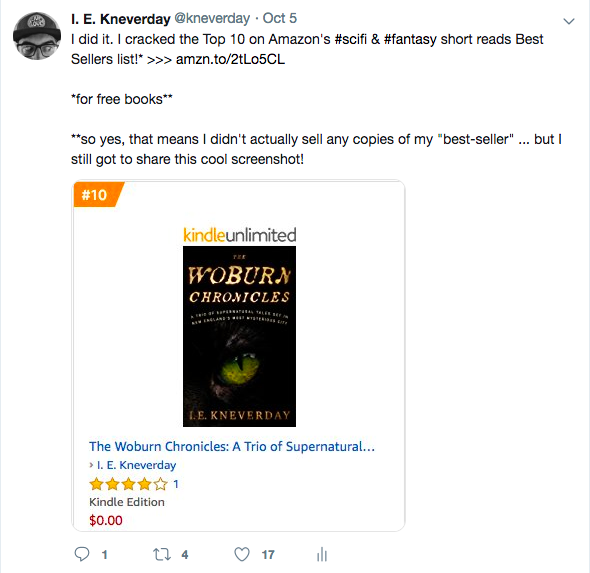 Then I got all jazzed up and experienced what can only be described as an “advertiser’s high” and ran another ad on Facebook. 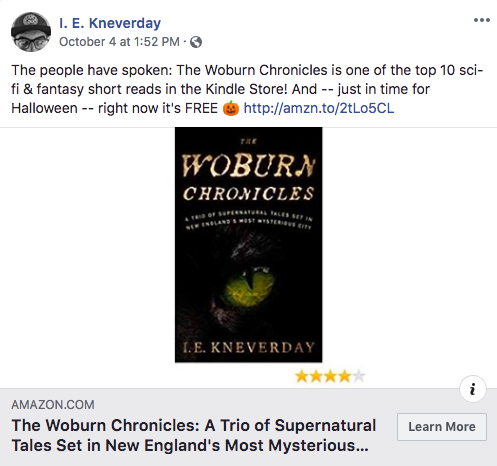 The Facebook ad above proved to be the most successful ad I ran as part of this multi-pronged promotion, yielding 393 views and 13 clicks. That’s a click-through rate of 3.3%.

I also ended up walking away with two reviews on Amazon, which is considerably better than receiving zero reviews. And, hopefully, there are more on the way. 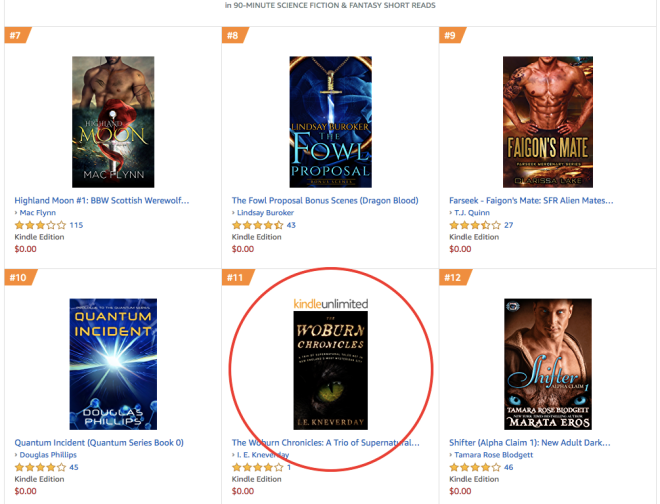 While tracking my book’s ascension on the 90-Minute Science Fiction & Fantasy Short Reads list, I made a startling realization: The books that were immediately ahead of me on the list had one of two design schemes:

What you choose to do with this knowledge is up to you.

As for me, I’m going to redesign my cover. I’m envisioning a blue background with a six-pack — no, eight-pack — of shiny abs in the foreground…

P.S. If you found this post insightful, enjoyable, or even remotely not-terrible, please consider dropping a buck for a copy of The Woburn Chronicles and leaving me a review. 🙏